skip to main | skip to sidebar

The internet streets have been buzzing lately 'cos there's a new girl in town, and it's ADAKU. 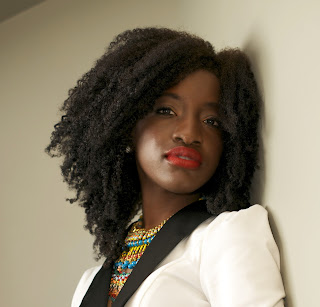 I've known ADAKU for a while and for as long as I've known her, I've always admired her creative flair. Among the list of things that seriously up her cool girl factor (such as being my fellow PH sister, modelling part time, hooking up some bad ass interior decoration, and that HAIR), she is gifted with an amazing voice AND also writes songs.  This US-Based Nigerian Singer/Songwriter from Rivers State has had to hide her talent and passion for singing in order to fully complete her degree education in Electrical Engineering, an education which has finally culminated in a Master's Degree in Electrical Engineering (whoop whoop for smart chicks!). Throughout her education however, Adaku continued to immerse herself in music whenever and wherever she could - her YouTube covers of popular songs such as Bruno Mars' "Grenade", Adele's "Someone Like You and Nneka's "Heartbeat, garnering over 100,000 views on the popular video platform.
This Singer/Songwriter who also plays the guitar and piano is set to storm the world with her uniquely sublime talents and is certainly well on her way on this journey as she was handpicked by YouTube as one of the five female artists that knocked their socks off in their Fresh Faces series. This included a full day's feature on Youtube's music homepage.

ADAKU just released her fresh new single titled "Or You Can". In her own words, ADAKU describes "Or You Can" as a song about being there for a friend, a lover or a loved one who needs a shoulder to lean on and most importantly a "big ass fro" to lay on. Initially posted on Youtube as a bedroom recording and a deviation from the usual YouTube cover videos, "Or You Can" took on a life of its own with over 15,000 YouTube views and troves of positive feedback that Adaku decided to create a studio version of "Or You Can" and release it as a single. Superbly written and produced by Adaku, it is a beautiful acoustic song with great lyrics and soothing guitar play that leaves the listener captivated and enthralled.

Take a listen to "Or You Can", and watch the video here:

And download the song and share the link with your friends here:
Or You Can (Studio) Single


My eldest sister passed away in 2005. I remember that period very clearly…it was right around the final exams period and my parents didn't want to tell me because they wanted me to focus on my exams. However I noticed that during that period, I started getting random “check-in” calls from family friends, and even my family. They were trying to gauge from the tone of my voice whether I had heard the news. I was living in complete oblivion and carrying on with my life. I lived in that state of unawareness for about a week after her death until one day a family friend called me and left a voice mail where he basically sobbed and said he was so sorry to hear about my sister’s death. And that was how I found out that my eldest sister had died.

That was the first death for us as a family unit, and for the longest time I used to comfort myself with the hope that my eldest sister had basically "taken one for the team" and God wouldn’t be so unkind as to break any of our hearts with another untimely death. These days I’m not too sure about that. God can break your heart anyway that he wants, and it's all meant to be according to his will/he has a reason for doing so. Please note that I am not assuming a tone of defiance here, I'm just saying it as it appears to be. I don't get the reason behind these things when they occur, but ah well.

In June or maybe July of 2011, there was a death that somehow or the other affected at least one person whom I knew. Five people died in a fiery car crash on their way back from a wedding in Anambra state. Two of the victims were the bride’s brother and sister, and the other two were the bride’s best friend/Maid of Honor and an American coworker/friend (who was visiting Nigeria for the first time ever and apparently was an only child). A whole bunch of people knew the deceased siblings, and the bride’s best friend was supposed to be my one of my friends’ roommate and partner-in-crime at Harvard Business School. They had met during the interview process and formed a fast friendship. My friend and the bestie/roomie/MOH were even meant to go on an Eurotour, which was scheduled for a few weeks after her death. To make it even sadder, the poor girl died a few days before her birthday. News of this very unfortunate and fatal car accident travelled far and wide. Even my mother and sister were talking about it. The whole thing made me step back and think…like why Lord? Why would he be so unkind as to take 2 children from a woman? One child is bad enough, but 2?? Why would you let 5 people perish in such a terrible way? Why would you wipe out a girl's brother, sister AND best friend too, like dayum. What about the American parents who lost their only child? How were they even supposed to try to deal with such horrible news? They say that God has a reason for everything…what was God’s reason for this car accident? Everybody had incredible stories about how these victims were young, bright, smart, and ready to take on life so why would it all be snuffed short like poof? They say that we should not question God in situations like that, but I beg to differ. Are we supposed to sit back and take whatever comes our way without asking a few questions? Why can’t we ask God why?
In the light of that tragedy, I was like na wa o. If God can allow a woman’s 2 children to perish in one fell swoop, what makes me or my other family members special? My big sister might have died, but that doesn’t mean that the rest of us get an automatic pass to live till ripe old ages.

And then yesterday, there was the fresh tragedy that is the Dana Airlines plane crash. I've been in a very somber mood since I heard the news. In fact, when I initially heard about that crash, I had a bad feeling about it. I said, with the 2 degrees of separation that most Nigerians have, we are guaranteed to be directly or indirectly affected by the crash. I have lost family friends in the 3 most recent crashes that occurred in Nigeria and I was filled with a sense of trepidation about this one. It's as if I knew…
As I perused the manifest, I say a familiar name and I said it’s a lie! Not him! Not my childhood friend who was my next door neighbor. His sister and I were childhood besties, and he and my brother were also pretty close. We literally were always at each other’s houses, we played together, our older sisters were homies and in general, our families were quite intertwined. Not him! He was like a brother when we were growing up, so seeing his name on that manifest and later confirming the news on BBM really left me in low spirits. The even more messed up thing about the situation is that his father was just buried last month, and now him? My God, I can’t even imagine how his mother and siblings must feel, if I feel this level of sadness. And of course, I had questions. I asked God why. Why would you let this happen? Why would you bestow such tragedy on a family in the space of barely 2 months. Once again, fresh perspective that neither me nor my family members are any special.

There were stories of victims in the crash that really struck a chord within me. There was a pastor and his wife…leaving 3 young children behind. I heard about an entire family…husband, wife, the wife’s mother, their 3 children, and 2 cousins. There were 2 sisters who flew in from the States to attend a wedding, There was somebody’s father, There was a girl who was supposed to be getting married to my friend's cousin this coming August etc etc. As I heard these stories, my heart sank all over again and I asked God why. Why would he allow an entire family to be wiped out? Poof. Just like that. What is the reason behind that? I struggle to understand. The pastor and his wife nko, why didn’t God protect his own? Again, why should parents lose their 2 daughters just like that? Why did 153 people die in such a senseless death? So many questions…
And then the thought of what those people's last moments must have been like just gives me the chills. Especially those little children. Father Lord!

I don’t believe that every death is meant to be, or that it was their time. I don’t believe that all those peoples’ lives were meant to end yesterday. I don’t know why it happened, and I don’t have any answers to my questions so I will continue to muse and throw a few questions here and there.
In the meantime, the world keeps turning and life goes on. Yesterday, Twitter was ablaze with news of the crash, today we have moved on to tweeting about the same ol' things that we tweeted about before Sunday, June 3rd. Even for the families that must be going through some gut wrenching grief, life goes on and the world keeps turning.

Ultimately, the lesson that I take away from all these tragedies is that we may pray to God and ask for his mercies but ultimately, he has the final say. I mean, they say that his mercies keep us, but the ones that died nko? Were they undeserving of his mercies? Again, so many questions and zero answers. Well, until my timely or untimely death comes, I continue to be thankful that I can see another day. Like my sister said to me yesterday; God gives, and God takes. Until he takes, may I continue to enjoy the gift of life and not take it for granted, amen.

To the 153+ people who lost their lives yesterday, may your souls continue to rest in perfect peace. Amen. To the families that they left behind, I cannot even begin to imagine how you feel right now. I've been very subdued since the incident, so you must feel a million times worse than I do. Please take heart. To friends and coworkers, stay strong people. Sigh.
Posted by Original Mgbeke at 10:59 PM 10 comments:

Bible Verse of the Day